My sweet little baby girl Lily (pictured) is 3 months old, and has discovered her hands. She tries to stick her entire fist in her mouth and sucks the skin until it is red and irritated, and also cuts her face with her fingernails, even though I keep them trimmed. Cotton gloves didn’t do much good since she would either pull them off in 5 seconds, or suck on them and that would leave her skin wet all day. I talked to our family doctor about it and she said babies can actually get yeast infections on their hands from sucking them too much. I also tried giving her a pacifier to suck on instead, but generally she won’t take it. Then the gloves went missing, about a week ago. Of course it was the dog, and after searching all over and not finding them, I hoped she didn’t eat them.

At about 4:00 am this morning, I awoke to the sound of my dog puking, and there were the gloves. I had enough of this nonsense and decided to make gloves myself! I had a shower cap I’d never used, and figured that would be perfect since the plastic outside would keep out moisture and the inside is velvety soft.

Paper/printer (for pattern, or make your own)

First, I made a pattern. You can make your own or print mine here (3-6 month size). This pattern has a 1 3/8″ cuff since that was the size of the ruffle on the cap, but yours may be different.

Next, I cut out 2 pieces — I recommend trying just one glove first, but you would cut 4 pieces total. Putting the outer sides of the fabric together, I sewed up one side (with 1/4″ seam allowance), stopping before the curve, then opened it flat. Then I cut 4″ of the elastic and sewed it on the same original seam from edge to edge (do this by pinning at the start and the end, and stretching the elastic flat to the fabric as you sew). Next, I put the outer sides together again and sewed the final seam. Lastly, I trimmed the seam allowance down to 1/8″ to be more comfortable. Turn it right-side out and there you have your glove! You can get 2 or 3 pairs out of one shower cap.

One thing I must say is be careful of the material you use since it will go into the baby’s mouth. I hope that those little hands will be all better…Lily’s are all good now! I wish I could say the dog is all good too, but ya know…bad dog is bad. 😉

Did you make a pair of baby gloves? Let me know with a comment. 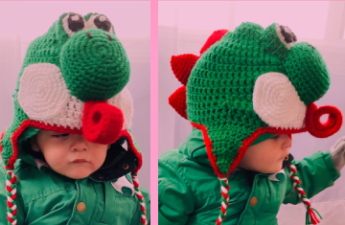 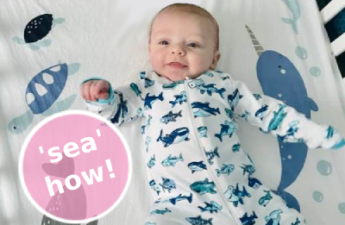 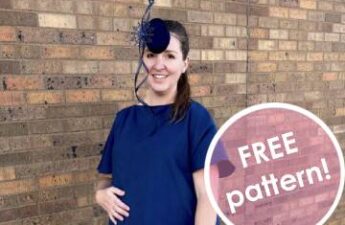